[Previous] Alisa Discussion | Home | [Next] Are rules your ally or your enemy?

YouTube notified me that they blocked my new video in Japan for copyright reasons. However, confusingly, it's actually blocked in the US while available in Japan. The video is fair use and should not be blocked. (Vimeo and YouTube both have reasonable pages with info saying what is fair use.)

The video is Critical Commentary on "Sucker" by the Jonas Brothers. It educates people on what's wrong with popular culture.

After the video was blocked, I uploaded it to BitChute. That worked but the video quality is low (the lyrics text is blurry). So then I uploaded to Vimeo, which allows higher quality. Vimeo doesn't play ads, but you can't upload much data without paying for an account. Vimeo doesn't have speed controls, so you need to use something like the Video Speed Controller Chrome extension. Vimeo lets you sell videos and associate documents with them, so I could potentially use it as a Gumroad alternative. YouTube has the most users and I'd prefer to use it as long as my videos aren't blocked, although users do need to get ad blocking software in order to have a good experience on YouTube.

Years ago, I looked at YouTube's copyright dispute process and didn't like it. As I recall, it didn't talk about fair use and it wanted me to provide information so that, if I was mistaken, it'd be easy to sue me. Today, the process is different, so I submitted an appeal. Here's what I wrote (706 characters out of a limit of 2000), then screenshots of the process:

The video is a critical commentary on a Jonas song. It's transformative, educational and non-profit. 90% is just me talking with the song paused. It's a 37 minute video about a 3 minute song. I play a few seconds of the song at a time and then analyze that section. No one would watch my video in place of the original song because I constantly interrupt the music. My video is not musical in nature, so it doesn't substitute for a song. My video is essentially a podcast or lecture which educates people about the flaws in popular culture. Making my video required using the song because the song is the target of my commentary, and the visuals and tone are relevant in addition to the text of the lyrics. 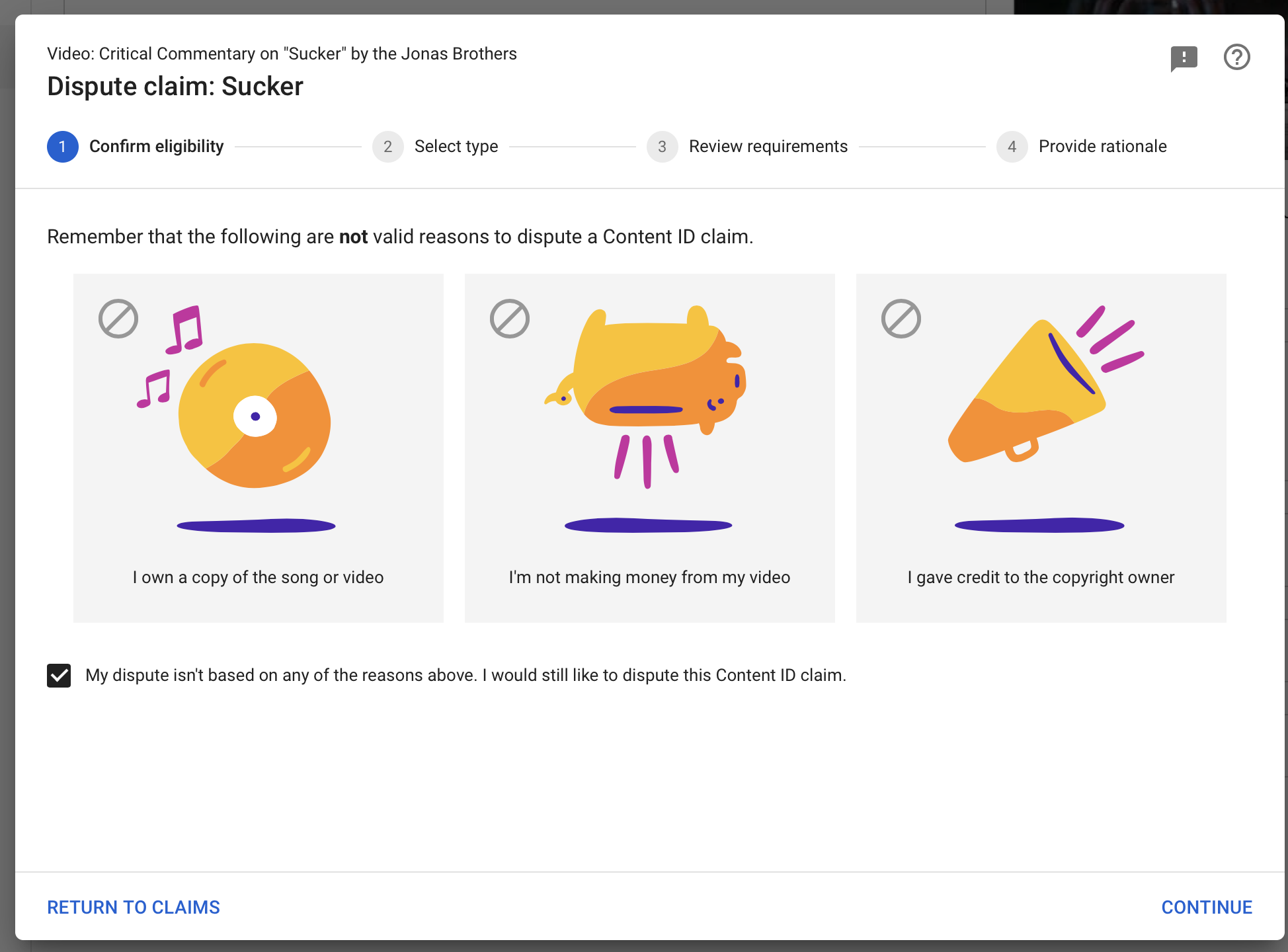 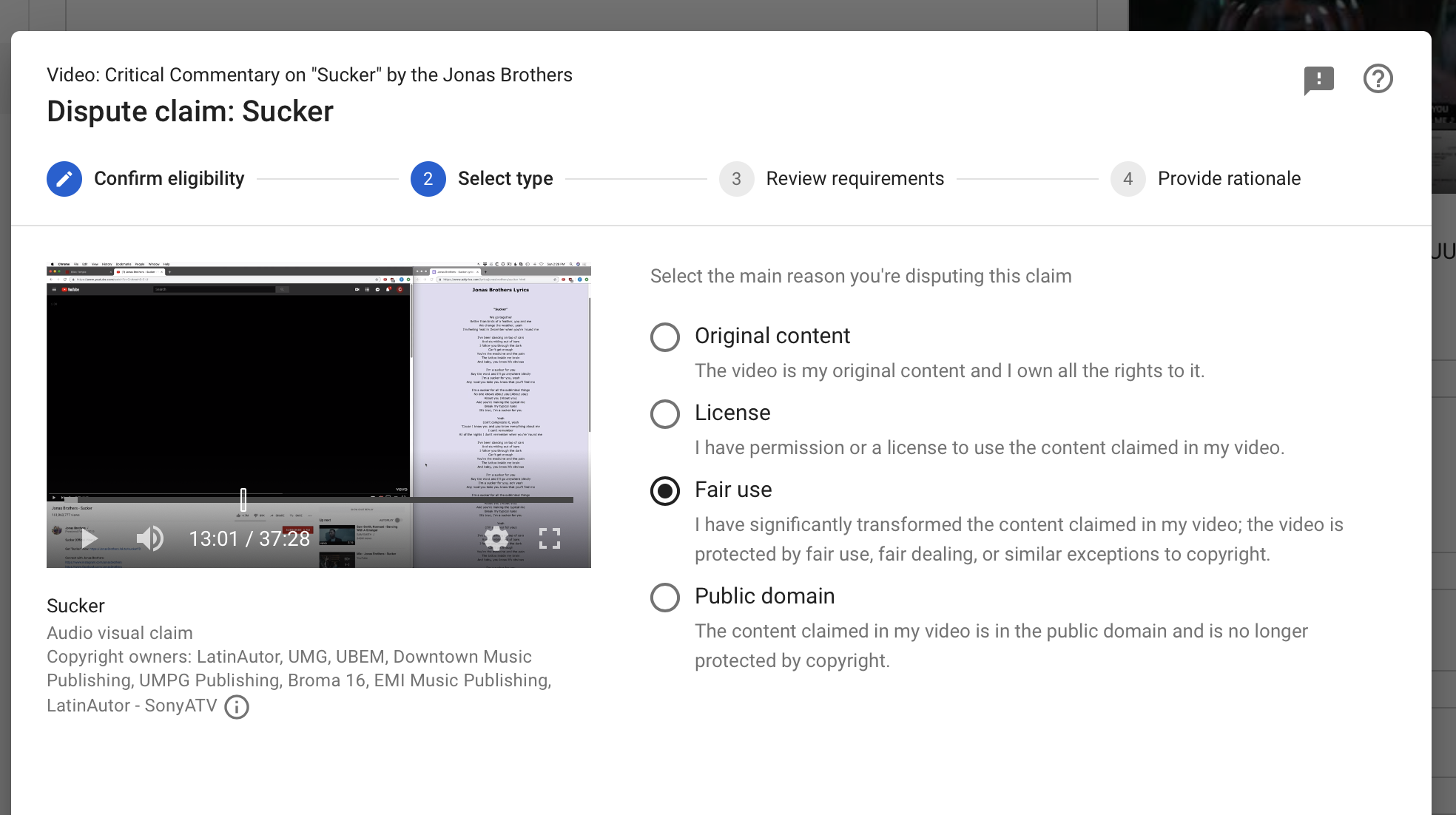 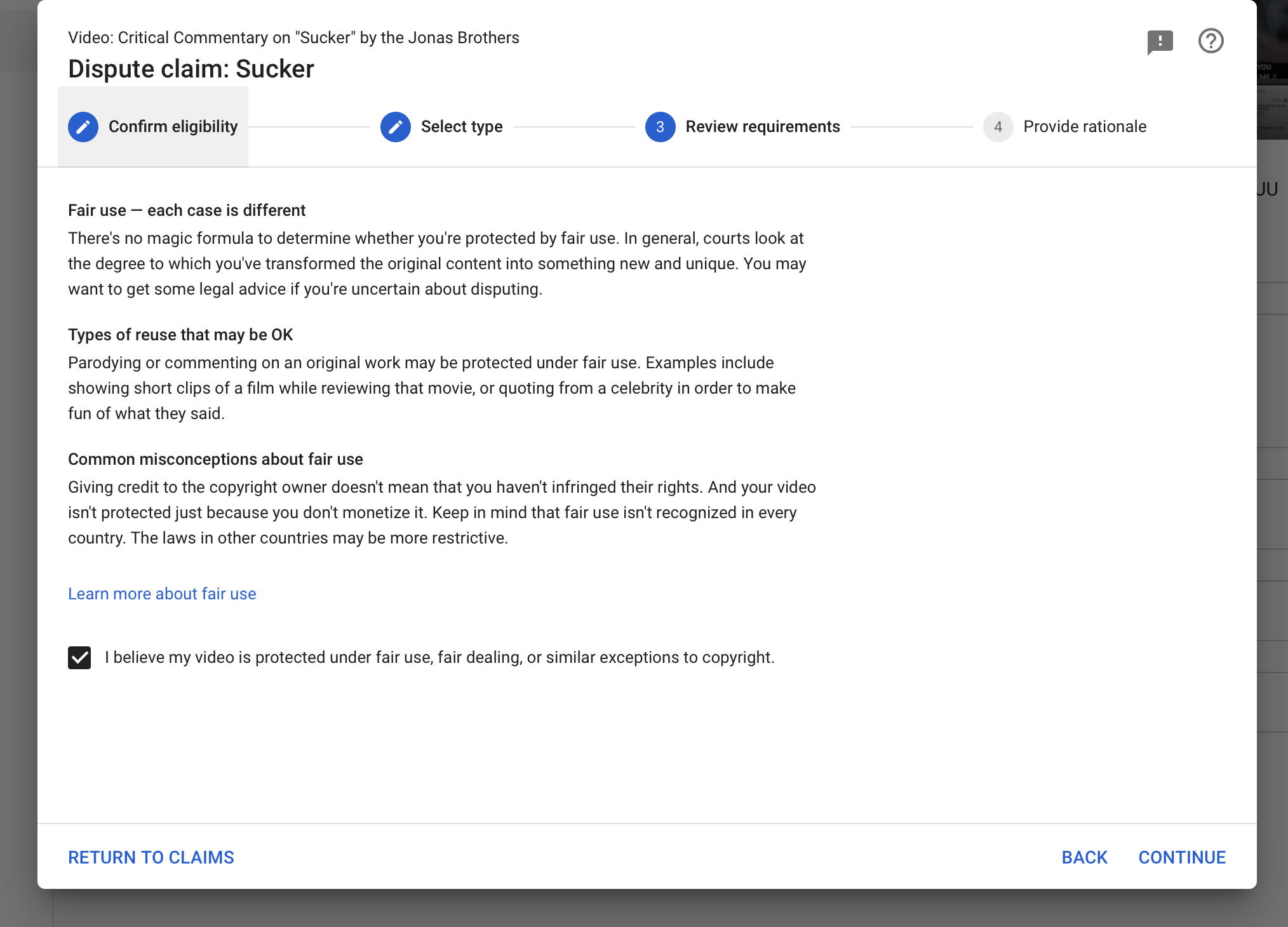 If this works, maybe I'll tell them that my Bones Song Criticism is also fair use. It was only demonetized, not blocked, so people could still watch it, so I didn't do anything. I could also let them know that The State of YouTube Philosophy (+5 video replies) and Teachers Paddling Children are Violent Abusers are fair use.

The video is unblocked while the fair use appeal is pending.

Universal Music Group submitted a second copyright claim on the same video. The first one was apparently just for the visuals, and the second one is for the audio. This time they're trying to block the video in all countries. I disputed the claim using the same explanation that I already used for the first claim. The video is now blocked in all countries for 48 hours (they get 30 days to respond to the dispute, but only 2 days of blocking the video, so they have to respond quickly if they want to keep it blocked). 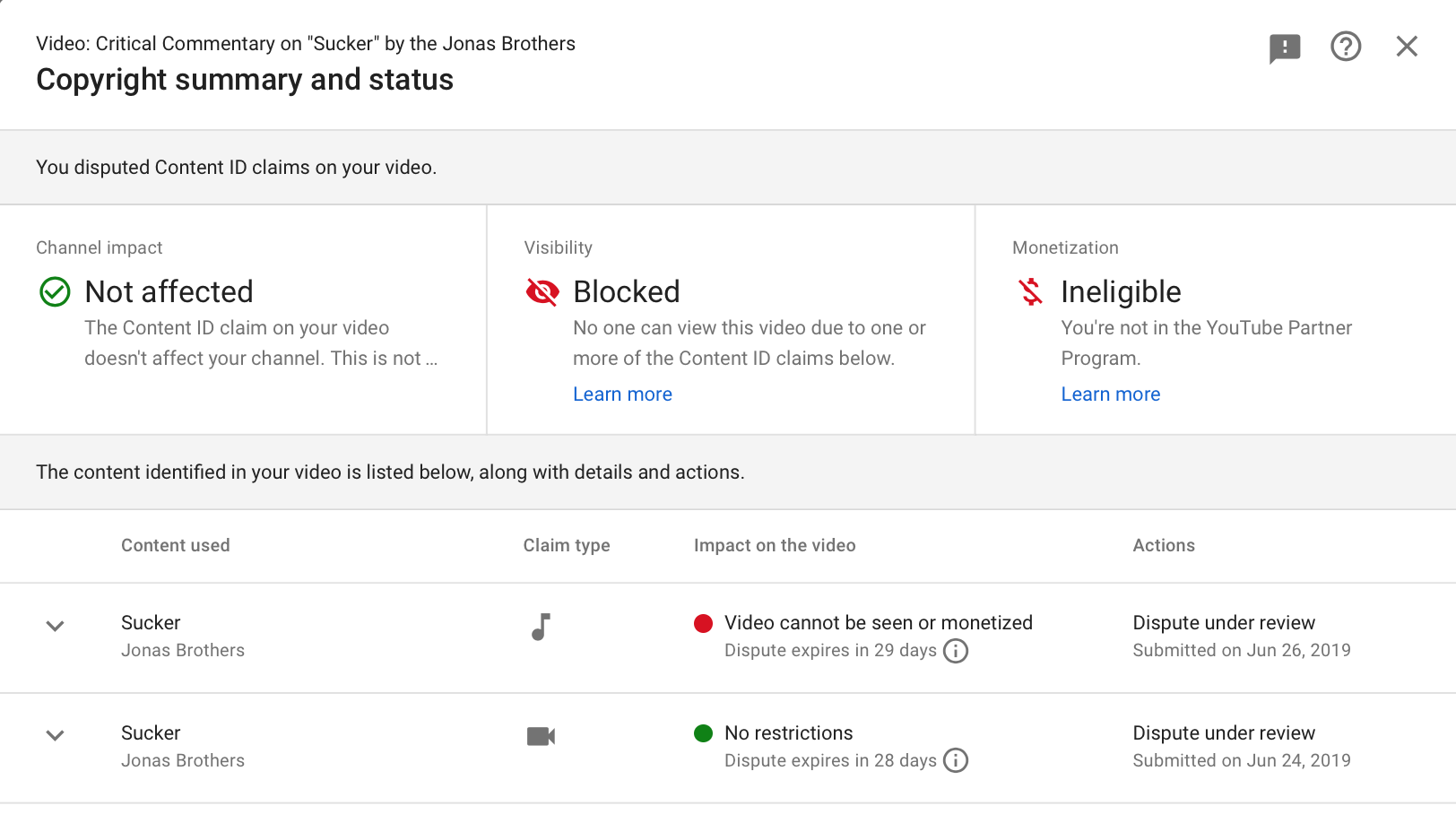 I had this problem the same day Project Veritas released a new video:

After watching the video, I changed my default search engine to Bing. I tried changing it a while ago but found some of the search results were worse. I think it was Duck Duck Go that I tried then. I'm giving changing search engines another try because Google is so biased. I have seen various other things showing Google is biased in ways that Bing isn't.

I also tried to upload my video to BitTube: https://bit.tube/

There were various reddit comments complaining about low video quality on BitChute and someone said BitTube was better.

I tried to upload my video on BitTube and it didn't work. The upload button was greyed out. I tried both Safari and Chrome. I gave up.

A story about a fair use dispute on YouTube:

#12865 I tried Brave. The upload button was red and appeared to work but got stuck at uploading thumbnail.

Veritas getting deplatformed on Vimeo today: 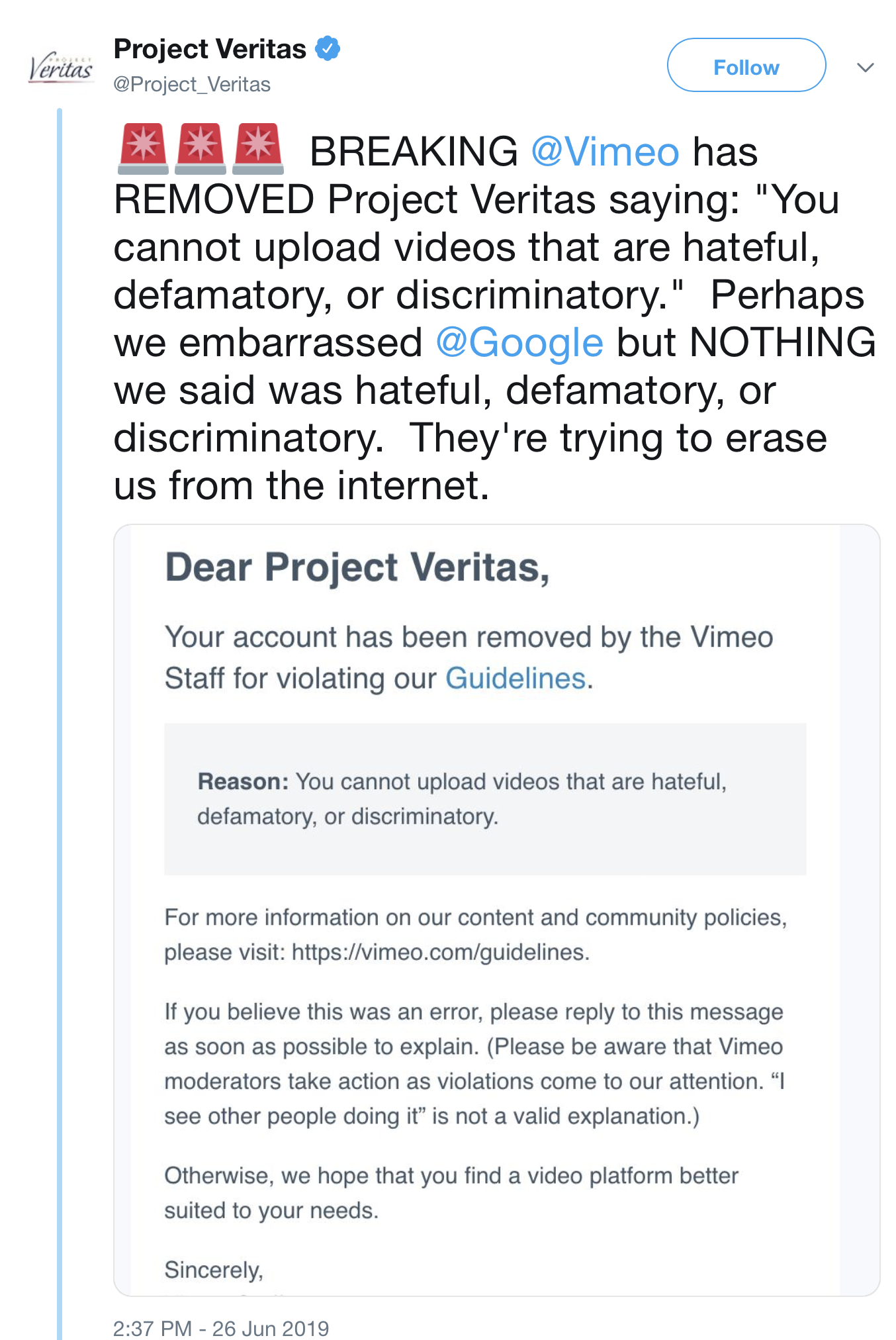 These actually weren't fair use. I just played some music while streaming today. But the video doesn't get blocked and those parts don't get muted, so it seems fair enough. (Muting the music sections would be bad because I talked over it some. If they could identify and mute the sections where *only* the music is playing, while keeping it when I talk over it, it'd be OK, but I don't think software for that is good enough yet.)

I copyright disputed my latest stream. YouTube blocked the video entirely (including the 90min of commentary on George Reismans' book following the ~11min of song commentary including a minute or two of song playback). I don't know any way to predict in advance what fair use may be blocked rather than merely having the monetization unfairly taken away (which I care about far less than blocking the video). I wrote:

> I played part of a Kelly Clarkson song on stream because a fan requested my critical, educational commentary on that song. I'm a philosopher who explains the real meaning of stuff to people including from popular culture. I didn't play the whole song, and what I did play was broken up with comments, so it's not a substitute good for the original. The song playtime is a small portion of the time I spent on commentary.

> In deciding how we could continue to press our case, one question was unclear. Our single video was subject to multiple copyright infringement claims. If we failed to prevail, would that mean that the account was subject to one copyright strike because all of the claims were against a single video, or multiple strikes tied to each claim against the single video? As there were four remaining claims against our video, and three claims could result in the termination of the account, the distinction was highly relevant to us.

> Unfortunately, we still do not know the answer to that question. This page seems like the closest to one having an answer, but it does not provide one to our specific question. We tried using the ‘Was this helpful?’ link at the bottom to get additional information, but YouTube did not respond.

> [What happened here to the NYU School of Law] highlights how challenging it can be for users with strong counter-arguments to dispute an allegation of infringement by large rightsholders. The Engelberg Center is home to some of the top technology and intellectual property scholars in the world, as well as people who have actually operated the notice and takedown processes for large online platforms. We had legal confidence in our position that would cost an average user tens of thousands of dollars (if not more) to obtain. Even all of those advantages were not enough to allow us to effectively resolve this dispute. Instead, we had to also rely on our personal networks to trigger a process - one that is still unclear - that resulted in the accusations being removed...