I’ve got a new policy. I’m going to deprioritize people (more than before), for any kind of individual/personal/custom attention, unless they engage a lot with my philosophy, Critical Fallibilism (CF). This policy doesn’t apply to formal debate.

I’m happy to generously go first and provide value to others, in the form of my free articles and videos. This is “first” in the sense that they haven’t yet provided value to me. This is more than enough. It’s bad to provide additional value, in an individualized way, unless they first reciprocate by providing value to me (ideally a similar amount of value to what I provided, but there’s flexibility there).

How can people provide value to me? The main option is feedback on my philosophy. An alternative is money (some people have a lot more money than time or energy). Another alternative is doing good work that I value (book, blog, videos, etc.).

You should only give feedback that you want to give, not feedback you’ll resent doing or that you’re just doing to try to get my attention. Sometimes people give 2-3 pieces of feedback and then completely stop if I don’t give them significant attention and reward them for it. Doing that has negative value to me. It’s like I give out $1,000 for free, then you give $1 in return 2-3 times, but then you stop unless I give you a further $20.

Feedback doesn’t have to be clever to be good. You can even just say that you’re not interested in something and why. Or say that you couldn’t think of anything to say about an article and explain your thought process (you shouldn’t give up without doing brainstorming or another specific method which you could then say something about). Pointing out parts (or whole articles) that you particularly liked or disliked is feedback. More thoughtful feedback is better, but even simple praise is feedback. Reddit comments are mostly feedback and you could read those for examples (note: nested Reddit replies are usually feedback on the comment they reply to rather than on the original post).

The most important purpose of my forum is to enable feedback for CF, especially criticism so that there are Paths Forward. It’s not to chat with people about their interests or to help with their problems. I’ve sometimes been too generous with ungenerous people.

What should you prioritize engaging with? My most important and high effort articles and videos. I organize my more important work by putting it on the CF website and CF YouTube.

Prioritizing well can take some thought. For example, if you’re not currently working on a topic (like grammar), then it’s understandable to engage less with practice-oriented (as opposed to theory-oriented) material about that topic.

Here are some things which are great to do but don’t replace CF feedback:

Please don’t engage with CF in negative ways like social climbing at my expense. Don’t debate me in an ambiguous or indirect manner, particularly without stating your position. Criticism for the purpose of truth seeking is appreciated. Bad, lazy questions are unwanted, especially when they’re arguing with me while maintaining some kind of ambiguity. Don’t ask someone else (like me) to lead or micromanage your learning (unless they’re a paid teacher or tutor). Good questions ask for help with a problem solving process you’re doing that ran into a difficulty (this often involves saying what you already did, towards what goal, and where you got stuck). Trying to understand what I said is a type of problem solving process, and a clarifying questions are good (when genuine, not part of a hidden agenda to argue). 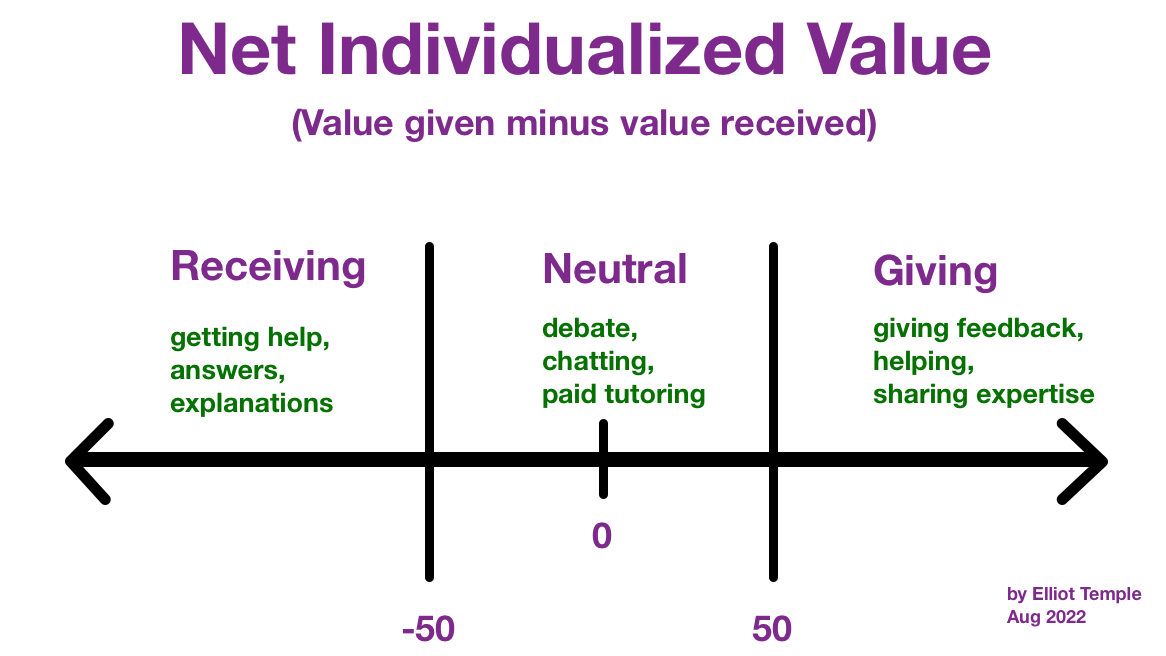 We don’t have good units to measure this in, so you have to estimate. The numbers are a bit made up but you can still form a reasonable opinion about whether the value given or received is bigger.

Don’t start with giving or neutral, then try to switch to receiving in the same conversation. That’s a bait and switch. If you want to switch regions, you should generally start a separate forum topic.

When you want receiving, you should ask for that in reasonably clear words. Like sometimes students go online and ask for help with their homework, and it’s clearly labelled and everyone knows what’s going on. That’s fine. But occasionally students try to get homework help without admitting what they’re doing, which is bad.

If you and your conversation partner aren’t on the same page about which region a conversation is in, that will cause problems. Ambiguity or disagreement about region are bad.

Keep in mind that, if you’re my fan, you actually did get some personal value from my non-individualized articles and videos. Although they weren’t customized for you, they still had significant relevance to your individual situation, which is why you liked them a lot. So overall you’re receiving value from me. Even if you gave a lot feedback and I never replied, you’d still be a net receiver of value.

If you’re a fan, you should take mutually beneficial actions to help the person who gave you lots of value. There should be win/win options there. If you don’t engage with CF or otherwise give me value, you should expect to be ignored not helped.

If you’re unsure/undecided about CF, do whatever you want – just don’t expect my personal attention and help.

If you want to engage in critical discussion, I’m open to debating many topics besides my own philosophy ideas. You’ll have to read my debate policy to see how I organize debates, and either agree to the impasse chain rules or propose an alternative methodology (that is written down at a permalink or in a publication). Debate should involve the initiator claiming to be a peer or better (similar level of knowledge and expertise, or higher, about the topic), which means the debate initiator isn’t aiming to receive value. He may receive value anyway if he loses the debate (the loser gets to learn something), but as long as he had a good faith expectation of winning that’s fine. (If you start debates that you expect to lose, as a way to learn things, you should openly say that at the beginning. And my debate policy isn’t for that.)